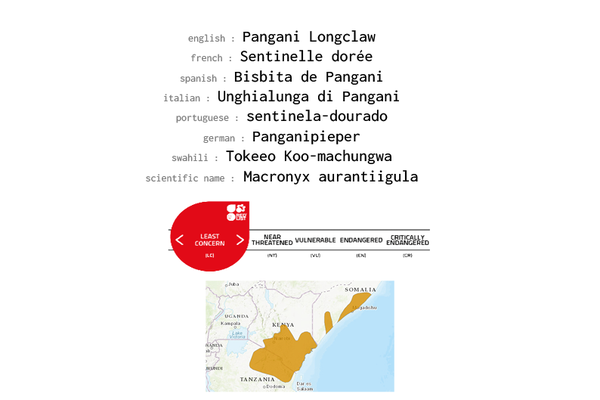 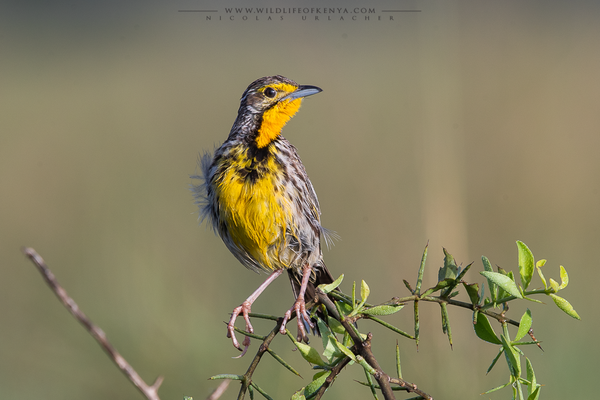 The Pangani longclaw (Macronyx aurantiigula) is a species of bird in the family Motacillidae, which includes the pipits and wagtails. It is found in Tanzania, Kenya and Somalia. The bird's natural habitats are dry savanna and subtropical or tropical dry lowland grassland.

Originally described by German ornithologist Anton Reichenow in 1891, the Pangani longclaw is a member of the longclaw genus Macronyx.The Pangani longclaw measures around 20 cm  in length. As its species name suggests, it has an yellow-orange throat. This is bordered with a black necklace. The upperparts are mottled various shades of brown, and the belly is yellow. In immature birds, the belly is more buff than yellow and the dark breast band less distinct. The flanks are streaked black and buff. The flight is jerky. The call has been described as a high-pitched siuuweeeee, with a pitch that rises, falls then rises before fading away.

Its more orange throat helps distinguish it from the yellow-throated longclaw and Abyssinian longclaw, however the throats of female and older immature Pangani longclaws can be more yellow. The last species is also found further north in the Horn of Africa in Ethiopia.

A predominantly ground-dwelling bird, the Pangani longclaw inhabits grasslands, to an altitude of 1800 m.