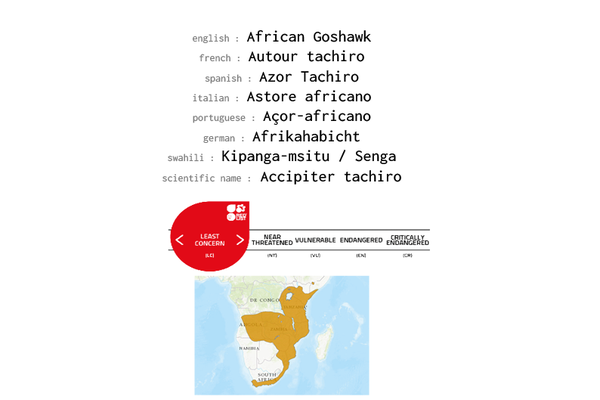 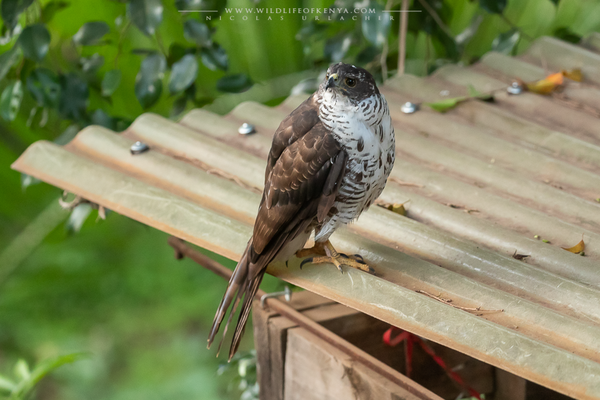 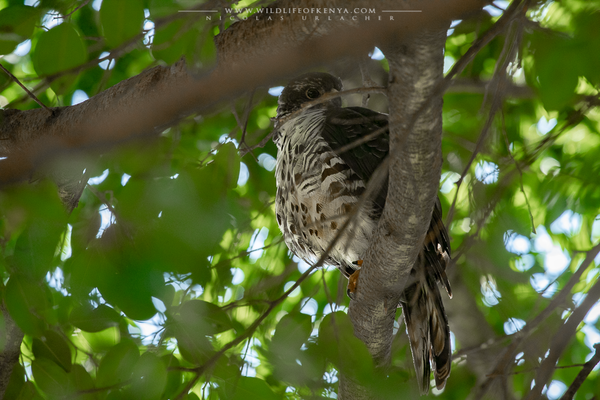 The African goshawk (Accipiter tachiro) is a species of African bird of prey in the genus Accipiter which is the type genus of the family Accipitridae.

It is noisy when displaying, when it makes its characteristic clicking call, like two stones being knocked together, which is made every 2–3 seconds. The African goshawk generally occurs in forest and diverse dense woodland in both lowland and montane areas, but it can also be found in riverine and gallery forest, plantations of exotic trees, parks and large gardens. It can occur in both moist and dry forest, even in isolated patches.

The African goshawk typically soars above the canopy in the morning in a display flight involving slow wing beats interspersed with gliding, sometimes so high up that the only sign of the birds is its regular clicking call. Its main prey is birds up to the size of hornbills or francolins, it also feeds on mammals and lizards. It is an ambush hunter, waiting on a perch until the prey is observed then swooping down to catch it. Pairs occasionally hunt co-operatively at large congregations of prey, such as bat roosts or weaver colonies. Invertebrates are also sometimes recorded as prey.

The African goshawk is territorial and the typical courtship display is performed by both sexes where they fly together in an undulated flight while calling loudly, sometimes finishing with a steep dive. The females builds the nest making a platform of sticks lined with fresh foliage, as well as pine needles, lichen and mistletoe. It is normally built on a branch away from the main trunk of a tree, as they prefer to nest within dense foliage but the nest may also be constructed on top of an old Hadeda ibis nest. The 1–3 eggs are laid in July–December, with a peak in September–November and are incubated mainly or solely by the female for about 35–37 days, while the male regularly brings food to her. The chicks are fed by both parents, fledging at about 30–35 days old but staying within the vicinity of the nest tree for another six weeks or so before becoming fully independent roughly 1–3 months after leaving the nest.