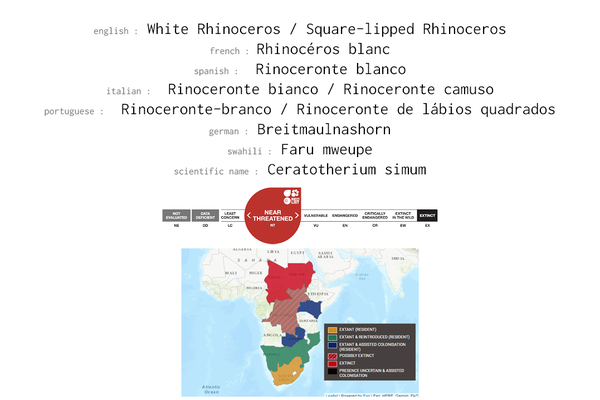 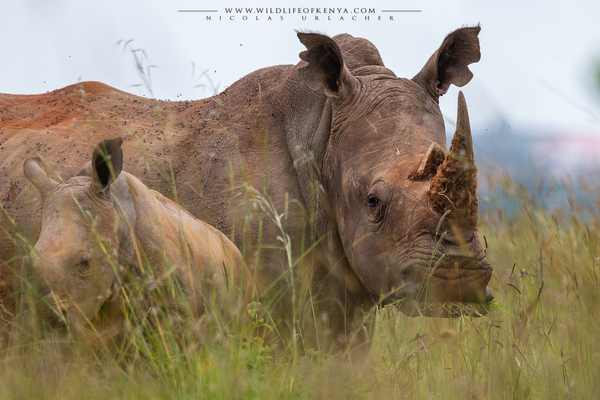 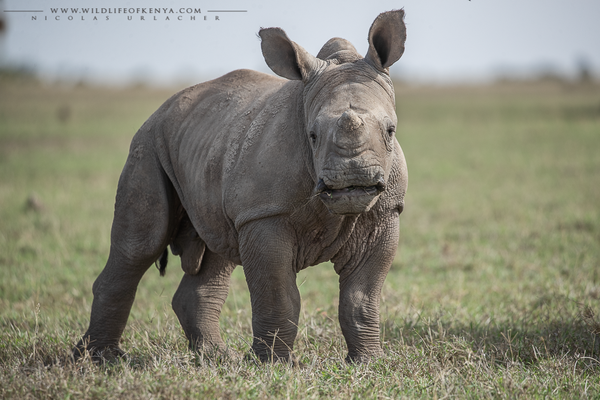 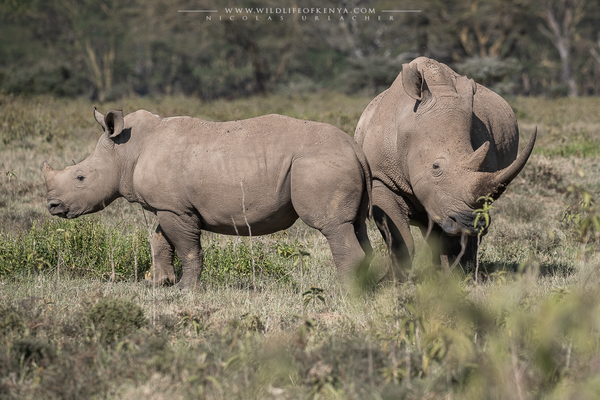 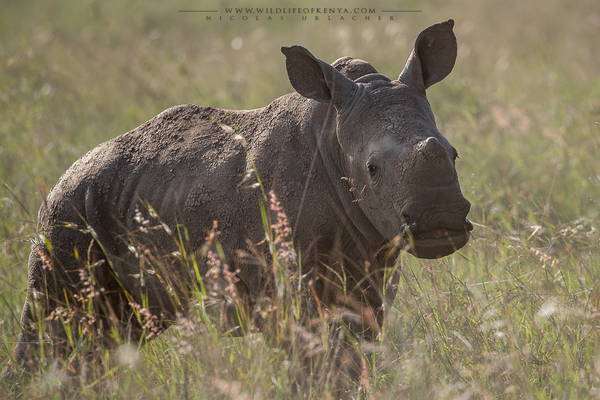 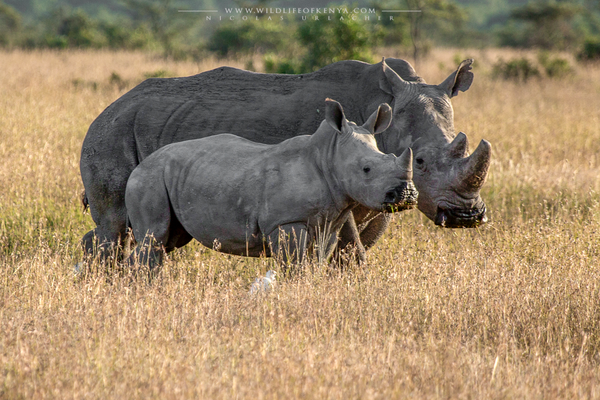 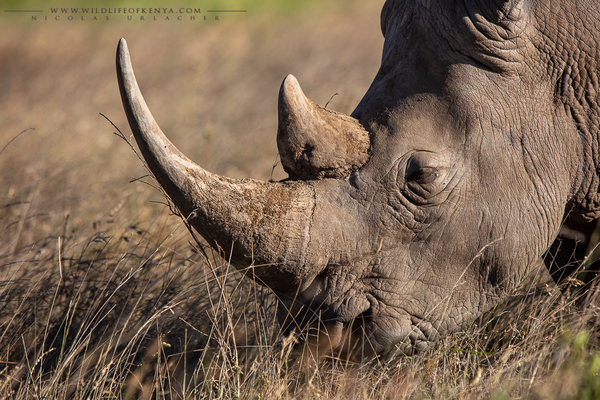 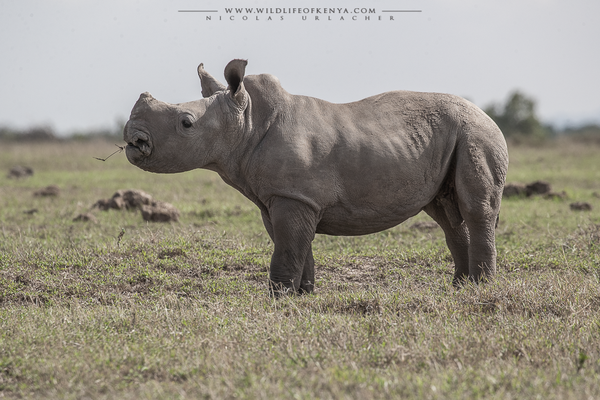 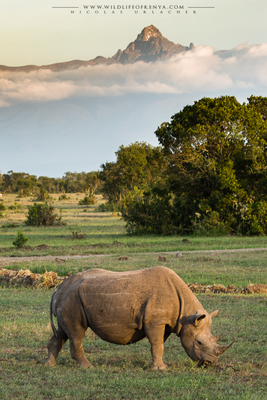 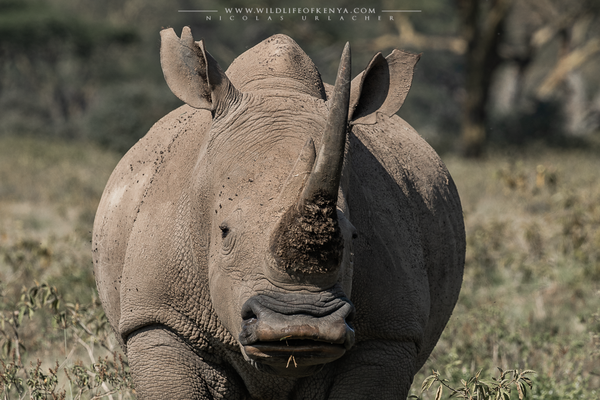 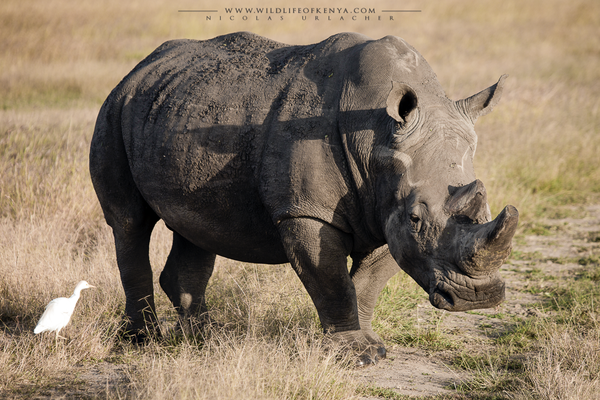 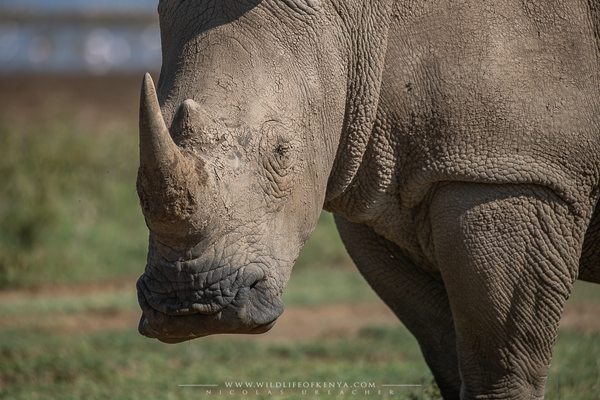 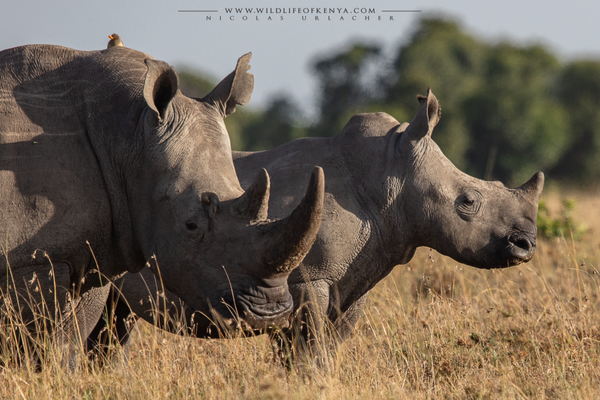 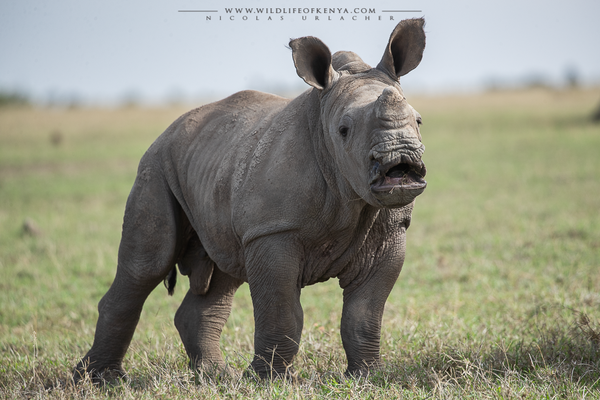 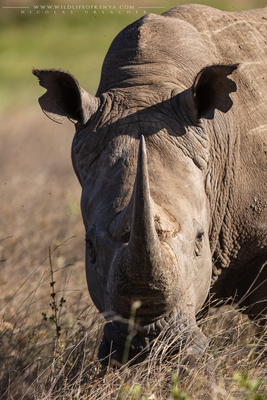 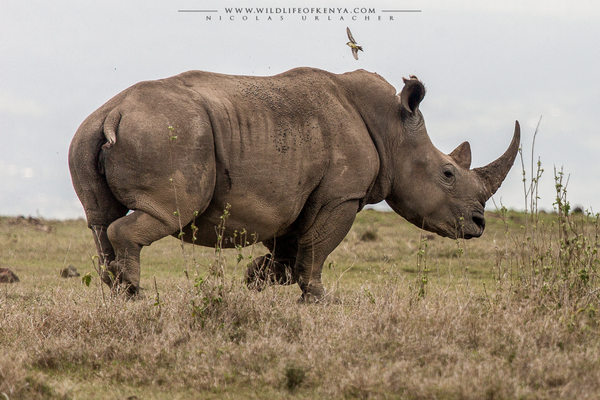 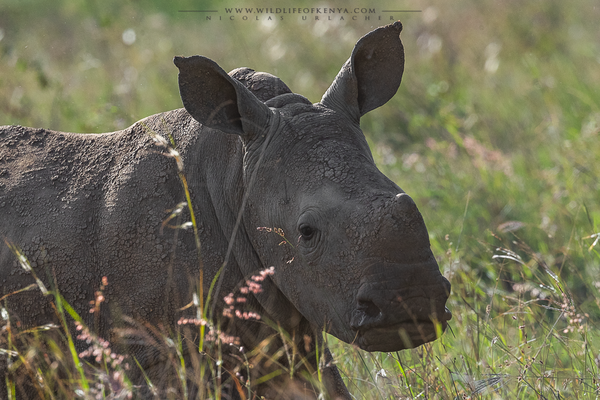 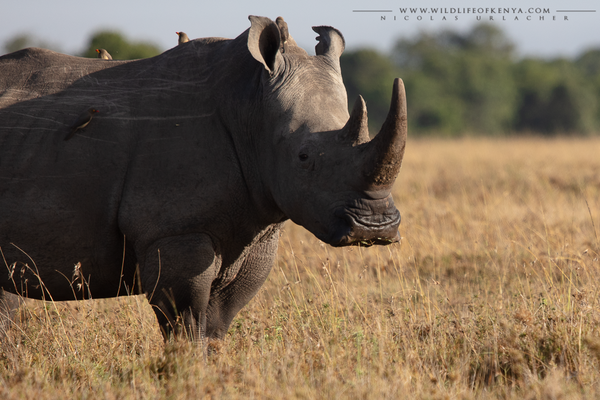 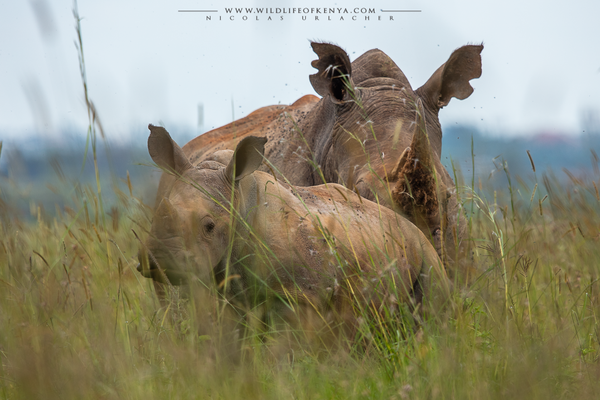 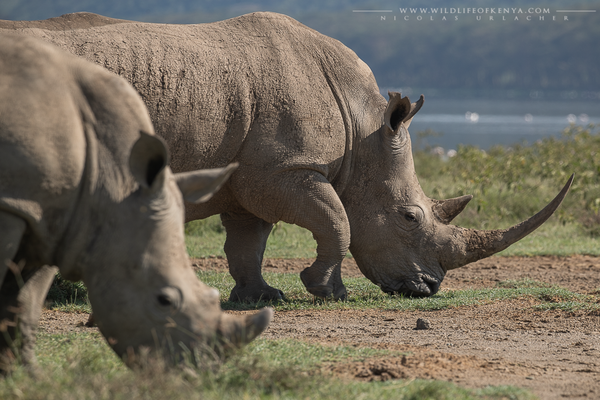 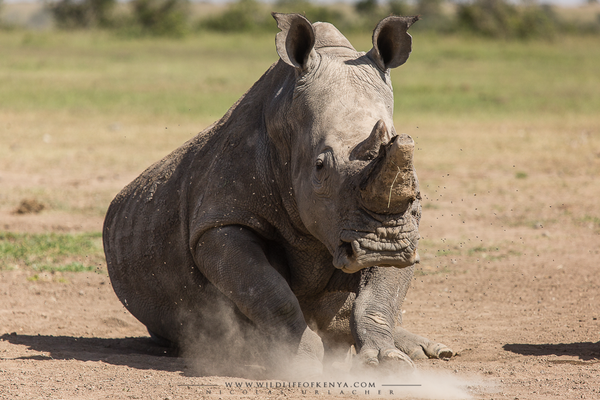 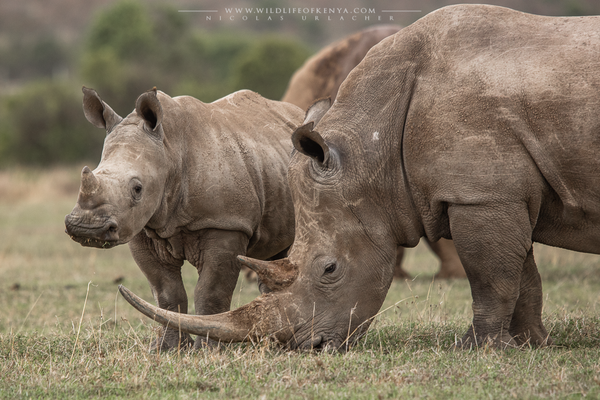 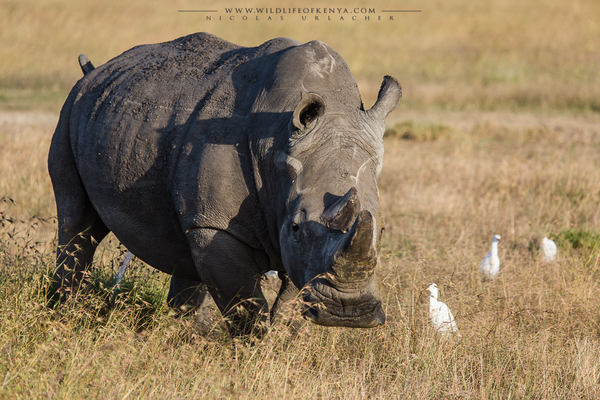 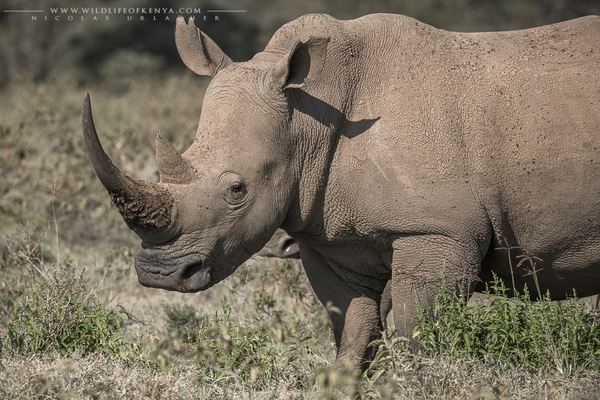 A common misconception about rhinos is that white rhinos are white and black rhinoceroses are black. Actually, the word “white” is merely a mispronunciation by English settlers in South Africa of a Dutch word, “wijd,” or wide. The white rhinoceros was described as “wijd” because it has wider lips than the black rhino with its prehensile upper lip. The black rhino gets its name because it's usually seen covered in mud.Both white and black rhinos are grey. To recognize easily a white rhino from a black rhino, even from far : if you see the rhino grazing, eating short grass on the ground whith the head down, that's a white one... black rhinos eat leaves on small bushes.

The white rhinoceros or square-lipped rhinoceros, is the largest extant species of rhinoceros. It has a wide mouth used for grazing and is the most social of all rhino species. All white rhinos live in herds (or crashes) of up to 14. These herds are mostly made up of females. Younger males do congregate together along with an adult female while adult bulls live alone. White rhinoceroses are found in grassland and savannah habitat. Herbivore grazers that eat grass, preferring the shortest grains, the white rhinoceros is one of the largest pure grazers. It drinks twice a day if water is available, but if conditions are dry it can live four or five days without water. It spends about half of the day eating, one third resting, and the rest of the day doing various other things. White rhinoceroses, like all species of rhinoceros, love wallowing in mudholes to cool down. The white rhinoceros is thought to have changed the structure and ecology of the savanna's grasslands. Comparatively based on studies of the African elephant, scientists believe the white rhino is a driving factor in its ecosystem. The destruction of the megaherbivore could have serious cascading effects on the ecosystem and harm other animals.

Females reach sexual maturity at 6–7 years of age while males reach sexual maturity between 10–12 years of age. Courtship is often a difficult affair. The male stays beyond the point where the female acts aggressively and will give out a call when approaching her. The male chases and or blocks the way of the female while squealing or wailing loudly if the female tries to leave his territory. When ready to mate the female curls her tail and gets into a stiff stance during the half-hour copulation. Breeding pairs stay together between 5–20 days before they part their separate ways. The gestation period of a white rhino is 16 months. A single calf is born and usually weighs between 40 and 65 kg. Calves are unsteady for their first two to three days of life. When threatened, the baby will run in front of the mother, which is very protective of her calf and will fight for it vigorously. Weaning starts at two months, but the calf may continue suckling for over 12 months. The birth interval for the white rhino is between two and three years. Before giving birth, the mother will chase off her current calf. White rhinos can live to be up to 40–50 years old.

Conservation status : The southern white rhino (Ceratotherium simum) is listed as near threatened by the International Union for Conservation of Nature (IUCN). According to the IUCN, this subspecies was on the brink of extinction by the end of the 19th century - having been reduced to just one small population of approximately 20-50 animals in South Africa. However, in one of the most successful collective conservation efforts of the century, there are now thriving populations in east and southern Africa – totalling over 20,000 animals.By the end of 2017, Kenya had a rhino population of 1,258 (745 Black rhinos, 510 southern white rhinos and 3 Northern white rhinos, the only surviving northern White rhino Male died in March 2018, thus only 2 females remain) having grown from less than 400 rhinos in 1980's.

Where to see rhinos (black and white) in Kenya :

- Nairobi National Park :  its success in both protecting and breeding black rhinos has earned the park the epithet Kifaru (Rhino) Ark, and it remains home to more than 50 black rhinos living in densities not seen anywhere else in Africa.

- Lewa Wildlife Conservancy :  is one of the main reasons why there are still rhinos left in Kenya. Back in the 1980s, the Craig family, who owns Lewa, and renowned rhino conservationist Anna Merz pioneered the setting aside of private land for conservation and then coupling it with high-end tourism. By 2015 there were 72 black rhinos and an estimated 62 white rhinos at Lewa, and nearly two dozen rhinos raised in the conservancy have been translocated to assist in growing rhino populations elsewhere in the country.

- Borana Wildlife Conservancy : Borana’s 35,000 acres of ideal rhino habitat is now part of one of the world’s most important rhino sanctuaries, its own important population of rhinos now free to breed with the world-famous rhinos of Lewa to create a combined black rhino population almost 90 strong.

- Tsavo West National Park : There are 78 black rhinos in the Ngulia rhino sanctuary inside the park and rhinos released from the sanctuary into the wider park can also be seen in Rhino Valley that runs through the heart of the park.

- Nakuru National Park : population of around 60. This is one of Kenya’s smaller parks and the rhinos (especially whites) are often seen around the shore of the lake.

- Meru National Park : this area of Kenya’s central east stood at the epicentre of the poaching massacres that ravaged the country’s rhinos in the 1980s. But Meru’s heavily guarded, 48-sq-km Rhino Sanctuary has been restocked with rhinos from Lake Nakuru. With around 25 black and 55 white rhinos, it’s once again an excellent place to see rhinos in the wild.

- Masai Mara National Reserve : it has black rhinos quite elusive and not easy to see.

- Solio Game Reserve : Solio Ranch, Kenya’s oldest rhino sanctuary and 22km north of Nyeri, is another pillar in Kenya’s story of rhino conservation — so many of the rhinos you see elsewhere in the country came from here. The wide open horizons here make sightings a satisfyingly easy proposition. Solio has 22% of all the rhinos in Kenya and probably the highest density of rhinos per square kilometer in the whole of wild Africa. It is by far the best and easiest place to see rhinos — sometimes as many as 50 on a single plain.