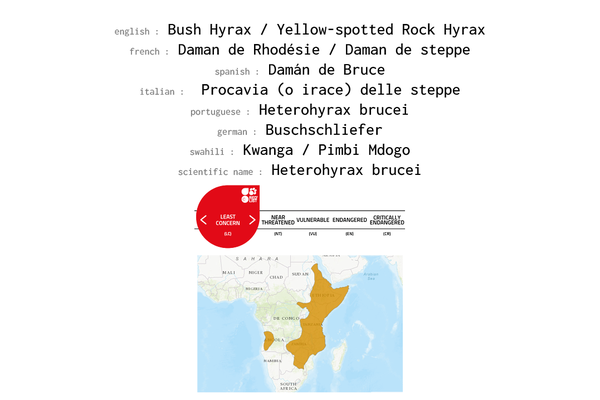 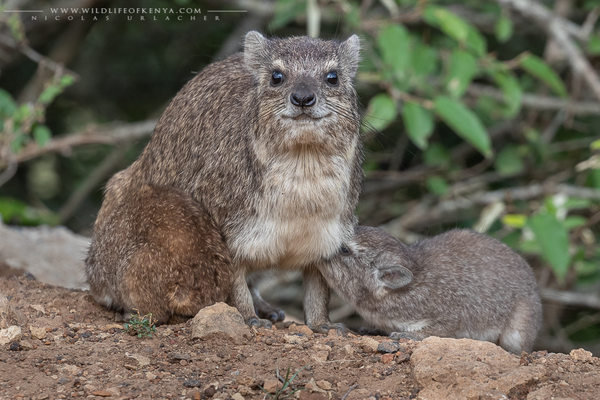 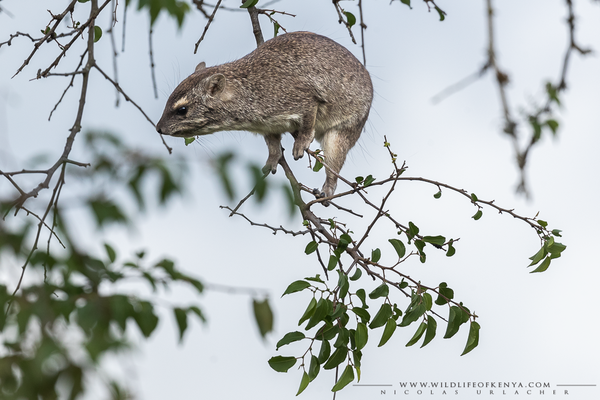 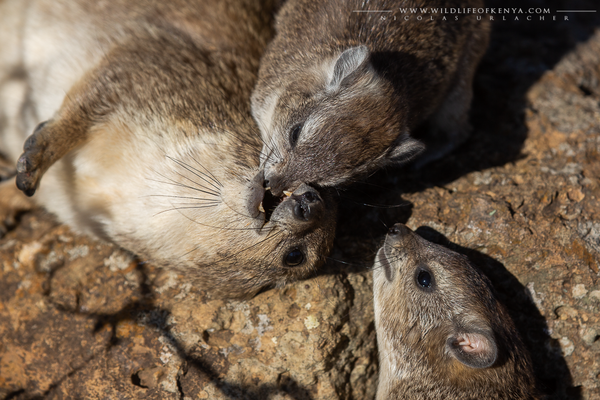 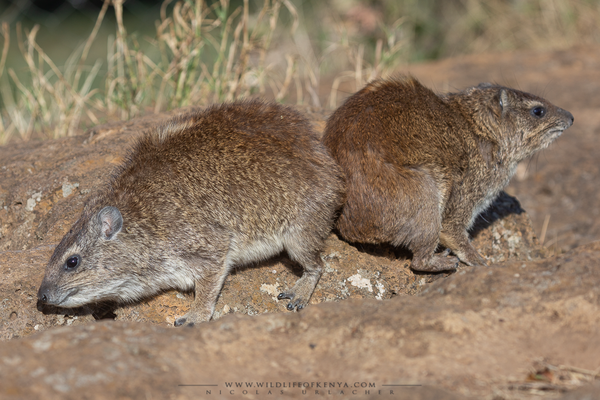 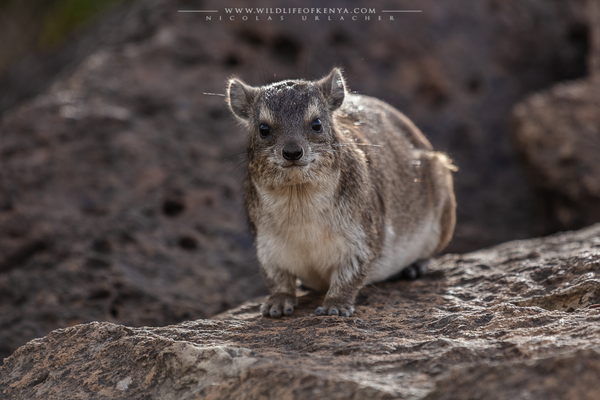 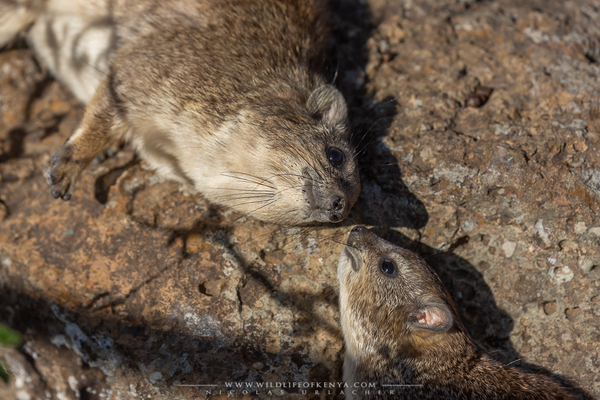 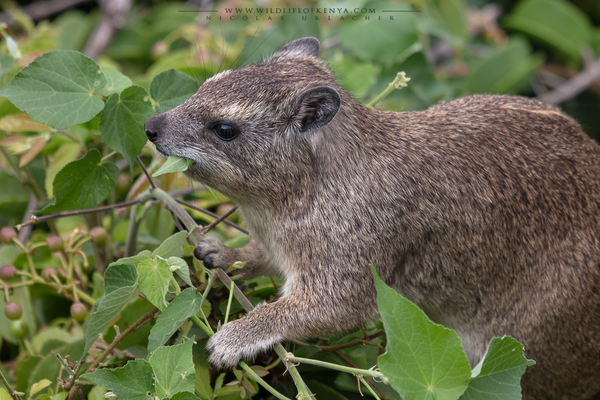 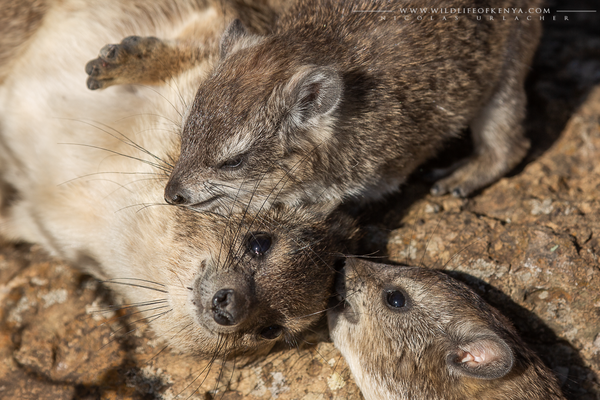 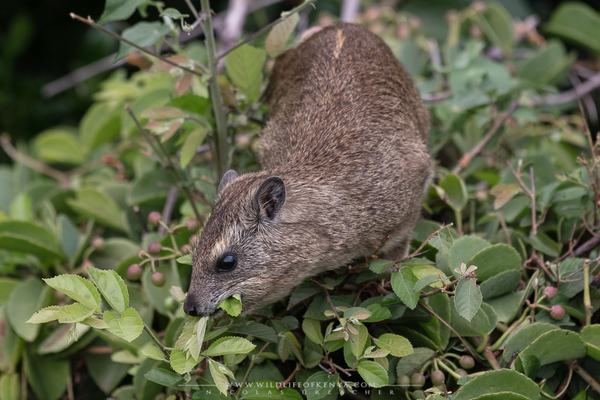 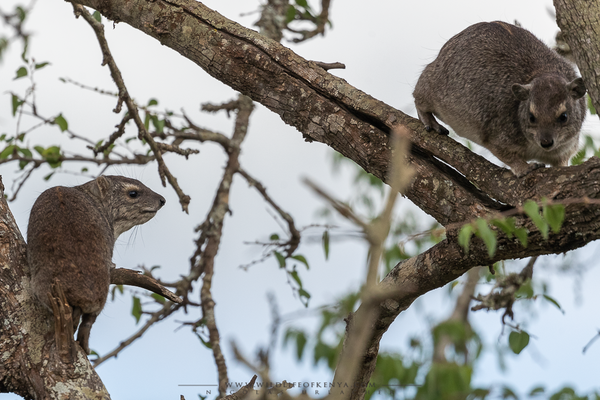 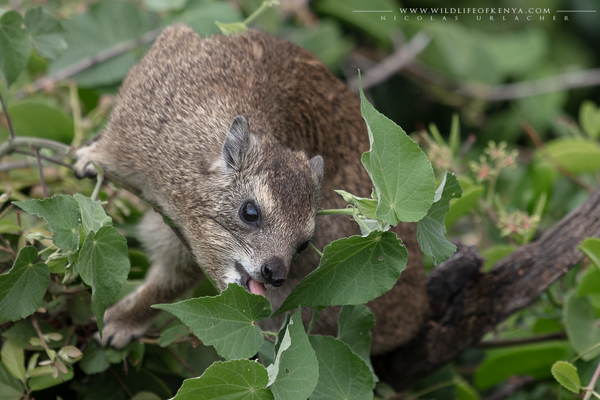 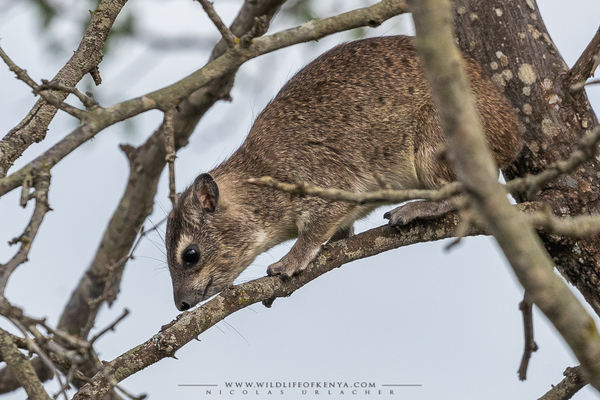 The yellow-spotted rock hyrax or bush hyrax (Heterohyrax brucei) is a species of mammal in the family Procaviidae. Heterohyrax is a bush hyrax, as opposed to a rock hyrax (Procavia capensis) or a tree hyrax (Dendrohyrax). Although difficult to distinguish in the field, the bush hyrax differs from the rock hyrax in being smaller and less heavily built and having a narrower muzzle.

Common names for the bush hyrax include yellow-spotted hyrax, bush hyrax, hogger hyrax, yellow-spotted rock hyrax, and daman de steppe (French).Hyraxes (from  Ancient Greek translates to meaning “shrew mouse”), also called dassies, are small, thickset, herbivorous  mammals  in the  order  Hyracoidea. Typically, they measure between 30 and 70 cm long and weigh between 2 and 5 kg. Scientifically, Hyrax are more closely related to elephants and sea cows. Hyraxes have a life span from 9 to 14 years.

The bush hyrax is a browser in regards to its eating habits. They spend 80% of foraging time browsing on twigs, leaves, buds, flowers and forbs. Only rarely will they consume grass.

While they are diurnal, 95 percent of the day is spent resting, sun basking in the morning and evening, but avoiding the midday heat. While sun basking is necessary for thermoregulation, it greatly increases their risk of predation. However, they remain vigilant and the dominant male will keep watch on a high rock and will give a shrill alarm if there is danger. Colonies of hyraxes include on average 34 individuals, but stable polygamous family groups make up the basic social unit. Hyraxes are also highly social animals. Play behavior is generally limited to juveniles and includes fur nipping, biting, climbing, pushing, fighting, chasing, and mounting.

If they are attacked or threatened, they will bite aggressively. Their keen eyesight and good hearing enables them to be aware of approaching predators or potential threats.

Other documented behaviors include dust bathing to rid themselves of parasites. They also form latrines and habitually defecate and urinate in designated locations where they reside