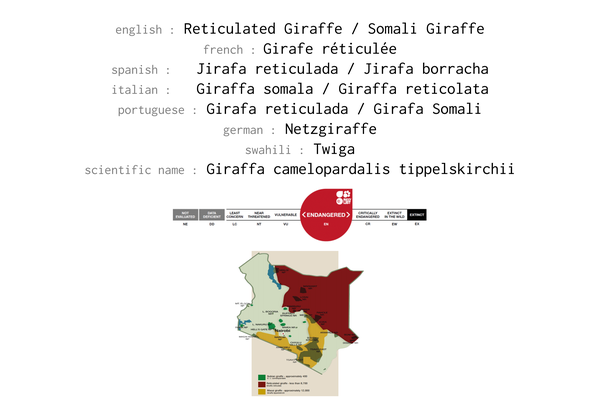 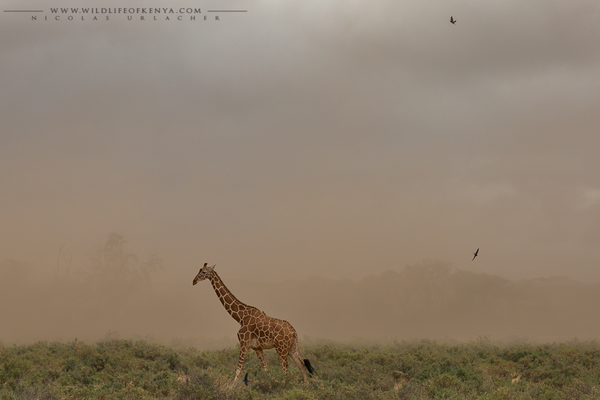 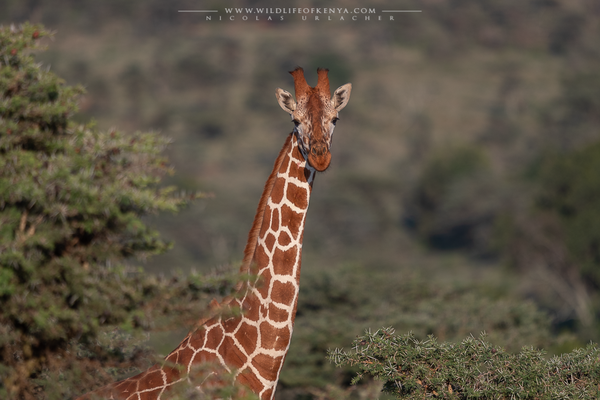 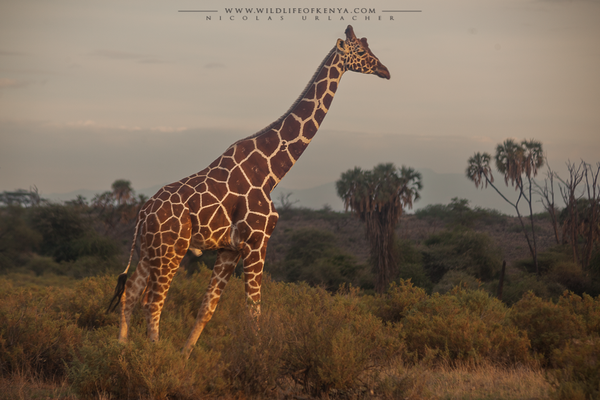 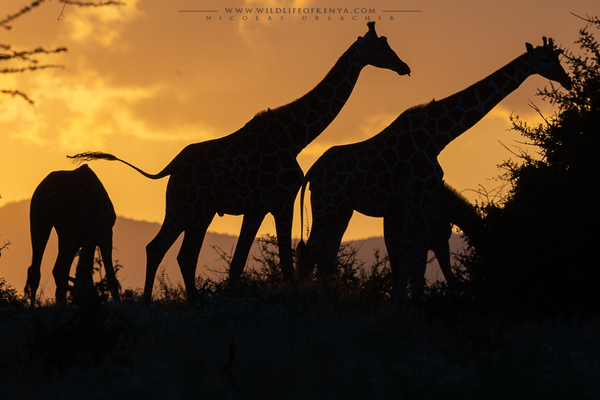 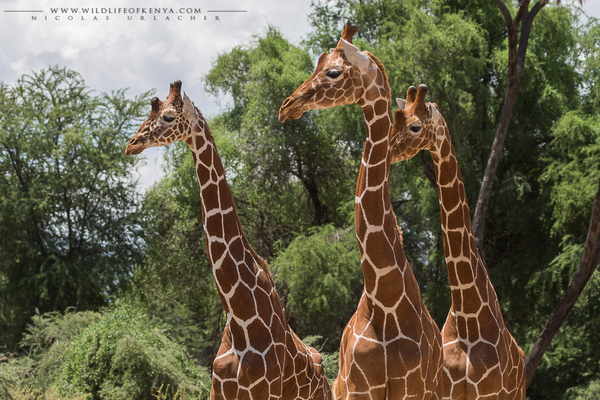 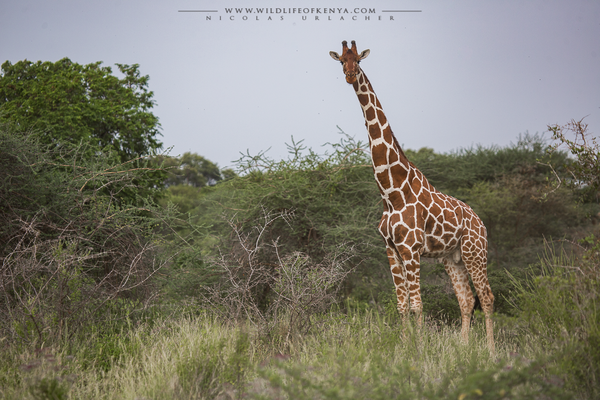 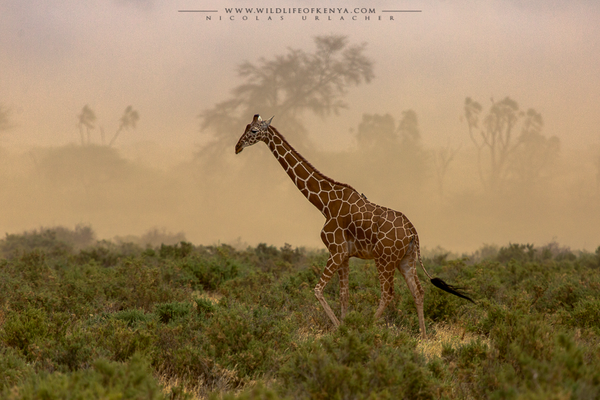 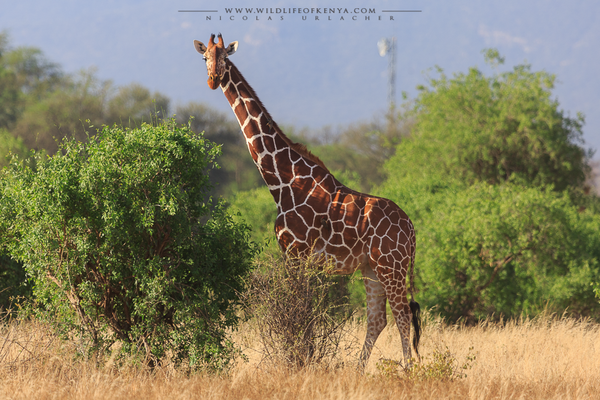 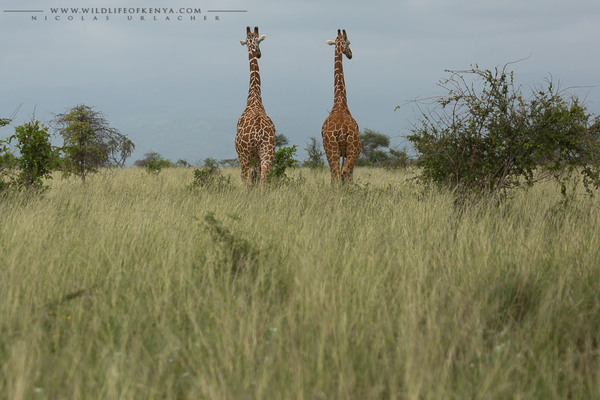 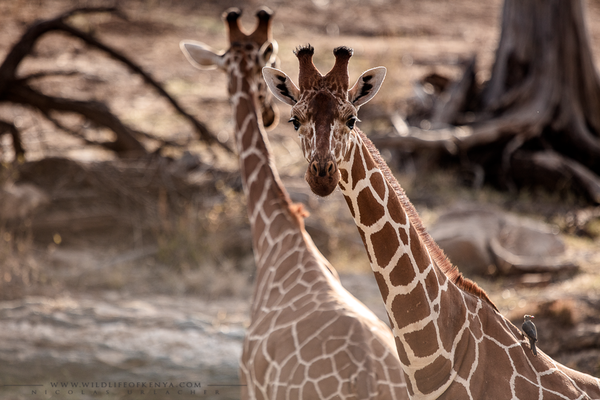 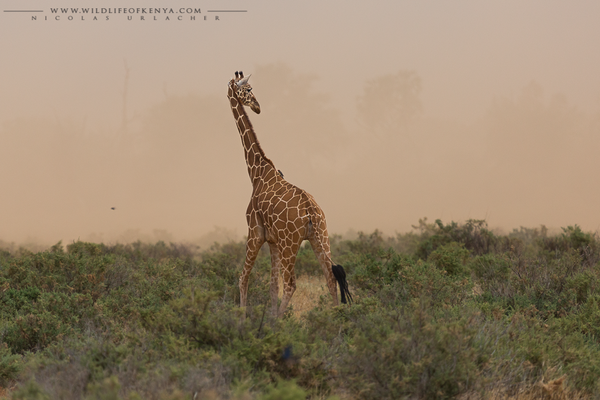 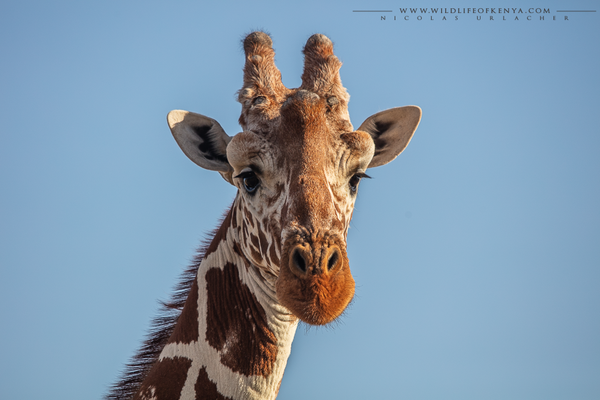 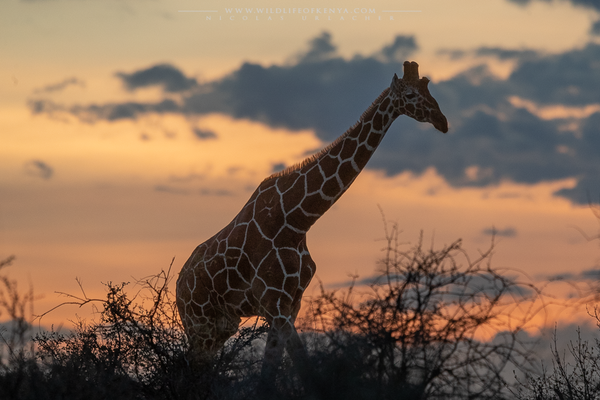 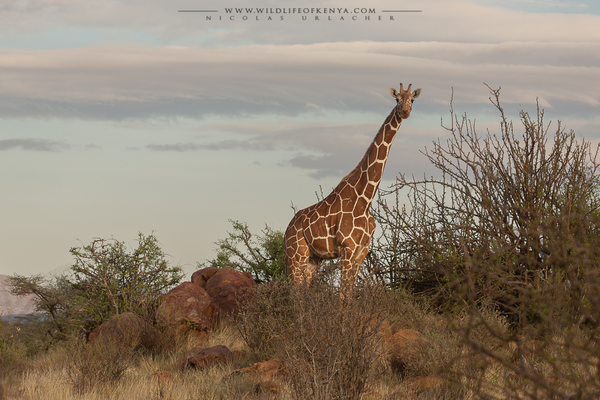 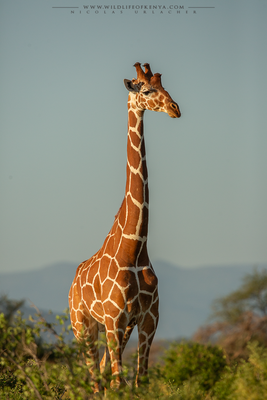 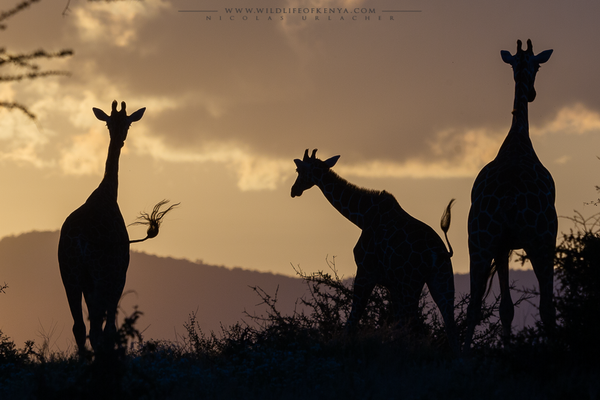 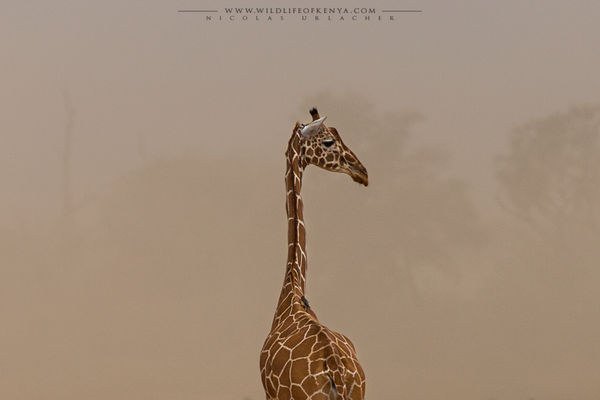 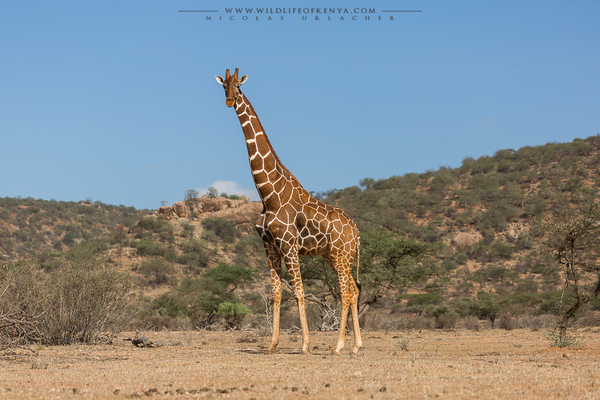 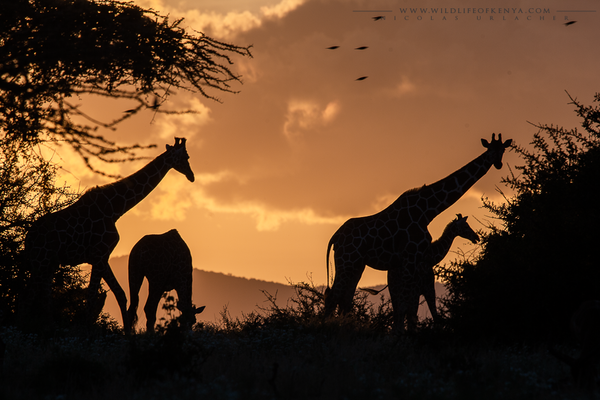 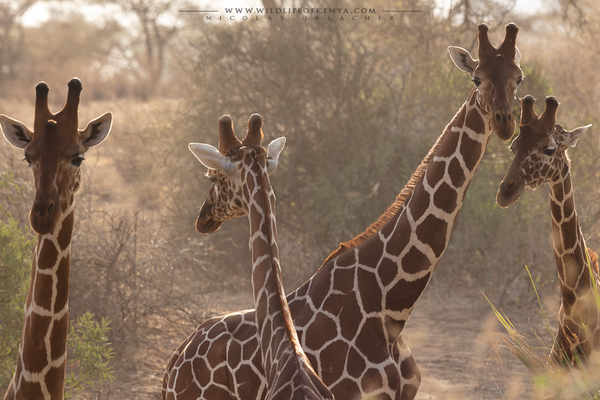 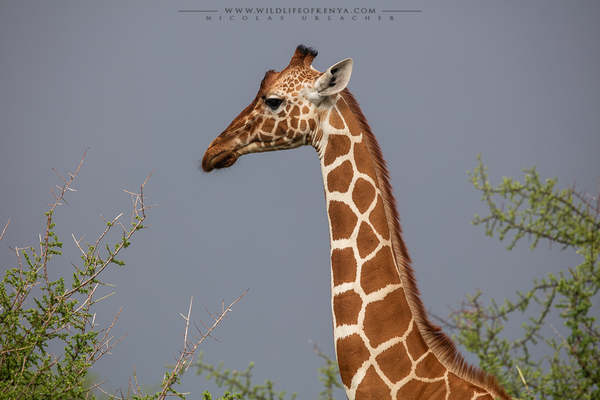 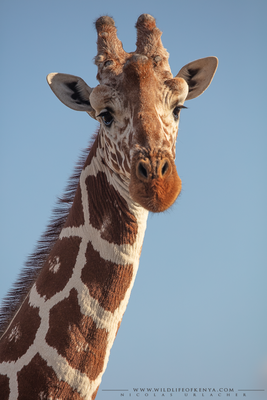 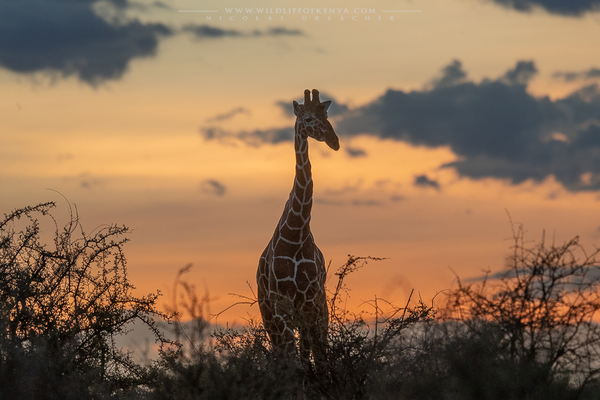 The reticulated giraffe, also known as the Somali giraffe, is a subspecies of giraffe native to the Horn of Africa. It is historically ranged from north-central Kenya to southern Somalia and Ethiopia. However, over just the past 30 years they have declined drastically by approximately 50%, from 36,000 to only 15,780 today. As a result of this decline, Reticulated giraffe were added to the IUCN Red List and listed as Endangered in 2018. In recent years, however, numbers across northern Kenya appear to be increasing with improved community and private land conservation.

The anatomy of the giraffe is amazing if you consider they have a heart that weighs about 11 kg, four chambers to the stomach, and valves that turn off the flow of blood to their necks when they bend down. They can move at a pace of 56 km per hour when they gallop.They have a height of 4 to 5,5 meters and a weight of around 1200 kg.Its neck contains seven vertebrae just like humans, but the length of each one is what makes its elongated feature. Their blood pressure is regulated and adapts to sudden changes in their movements, such as when they are drinking water. A giraffe has just 2 gaits - a walk and a gallop. Their ambling walk is similar to that of a camel's, in that their entire weight is supported alternately on the left and then the right legs.

Almost all of Reticulated Giraffes feed on leaves, twigs, and bark of trees just like all other species but the acacia tree makes up most of their diet. While other animals can’t consume acacia leaves due to the thorns on them, all giraffes have very thick lips and tongues so they can eat this tree without any problems at all. They will consume up to 34 kg of food a day and spend many hours a day eating. The leaves provide them a lot of water, so they do not require to drink frequently. They can survive without water for a few days or even a few weeks.

These giraffes can mate any time of year, but most of it occurs during the rainy season when food is plentiful. When breeding, males are mounted on the back of females as most terrestrial mammals do. The gestation period lasts 15 months and gives birth to a single calf. Births occur at any part of the year but are more frequent during the dry season. A mother can have a maximum of eight offspring during her entire life. The calves born weighing about 90 kg and fall to the ground from a height of almost 2 meters when they leave the mother and can walk in just 20 or 30 minutes. They grow very fast during their first  year, which gives them an advantage over their predators.

Adult reticulated giraffes very seldom have problems with predators. They have a keen sense of smell and can see for miles away. They are aware of danger often before it can become a serious threat to them. The impressive size of an adult Reticulated Giraffe is something most predators want to avoid. Although adults do not have many natural enemies, they are the target of crocodiles and other predators when they bend to drink water. However, the offspring are the most vulnerable to being caught by expert carnivorous hunters, especially when they approach the rivers, sleep or walk away from the mother. They are often victims of lions, leopards, and other predators. The mortality rate in the first year of life is more than 50% for those in the wild. Sometimes injured or sick adults become prey for them as well. Giraffes have extremely keen eyesight and can see great distances: they can spot a moving person a mile away! They also have excellent hearing. These sharp senses help giraffes stay alert for predators like lions.