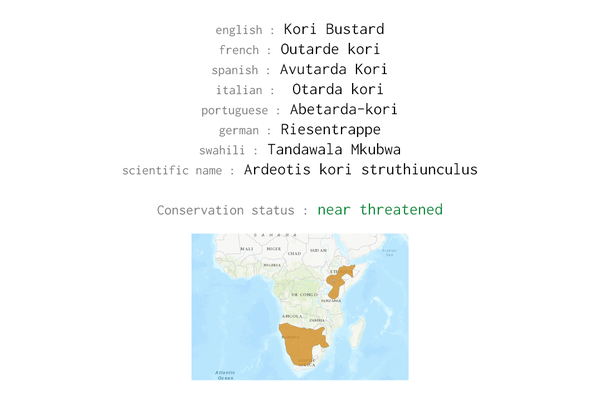 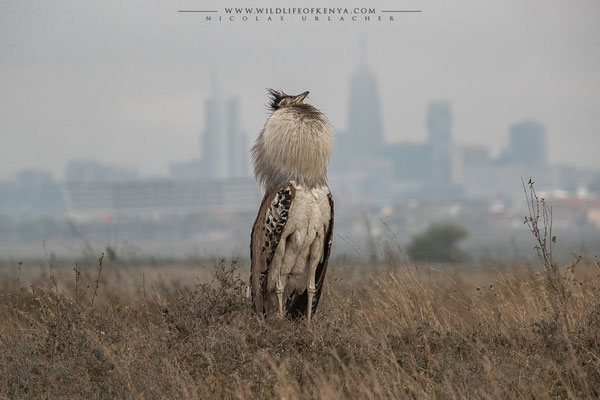 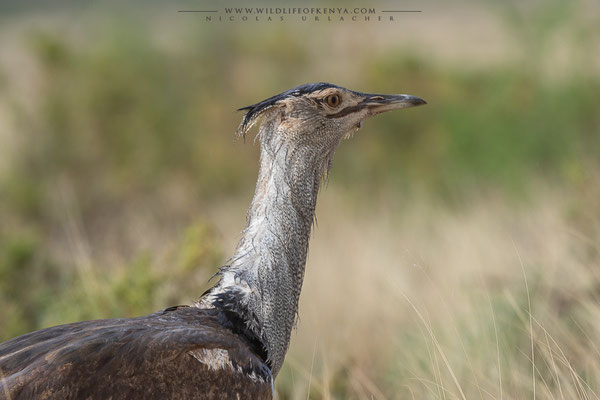 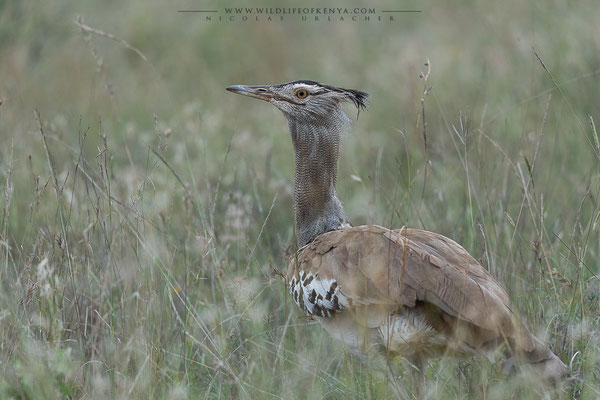 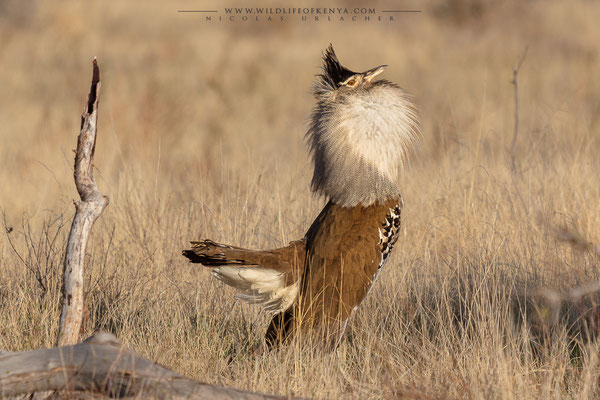 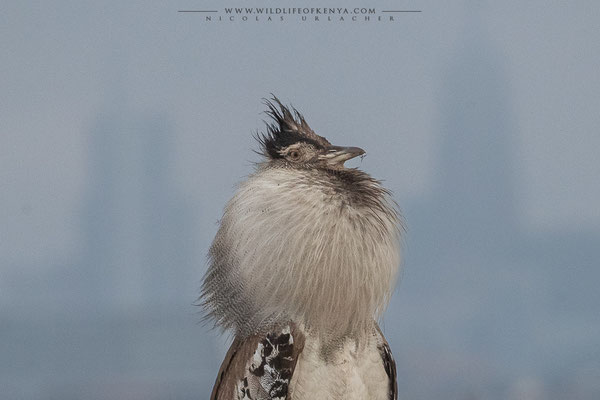 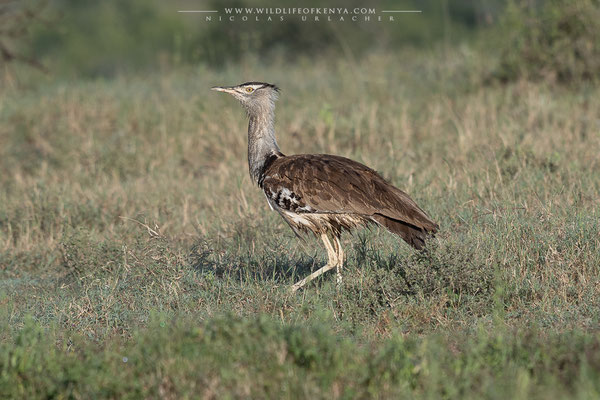 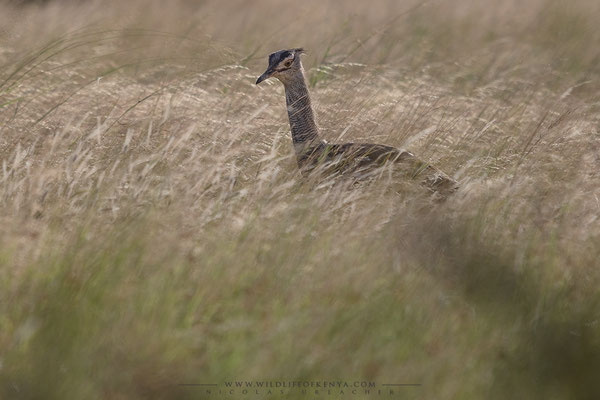 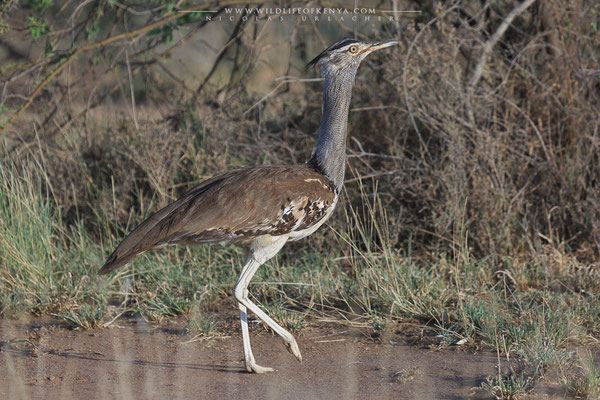 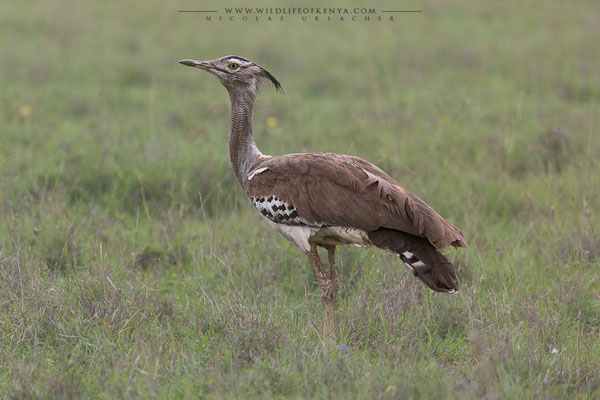 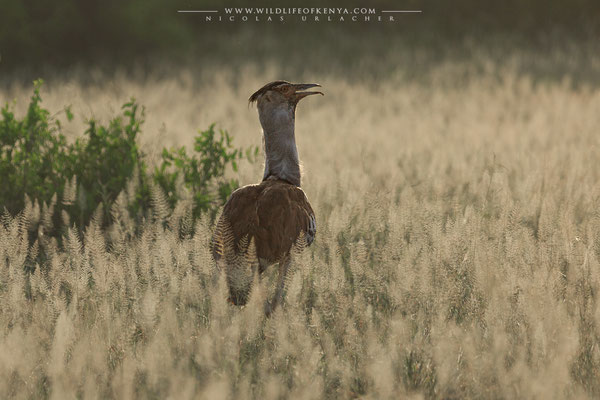 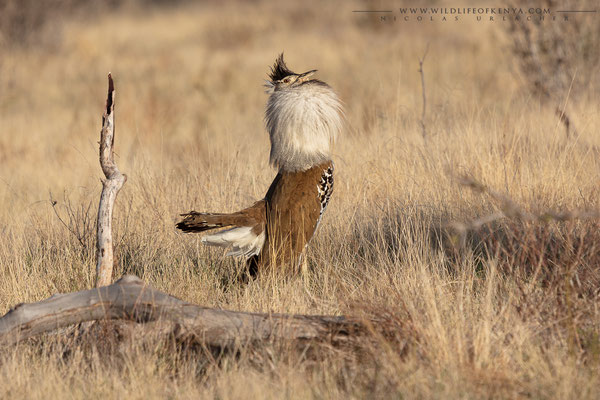 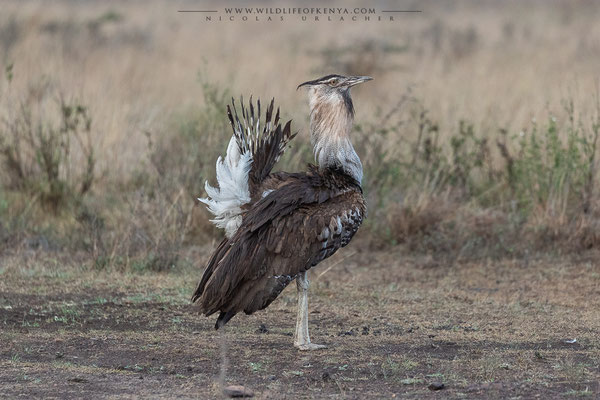 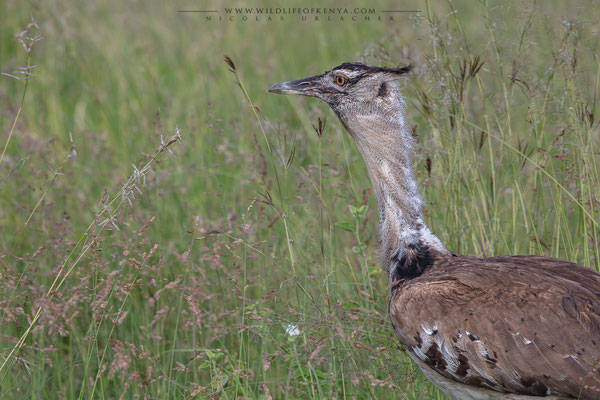 The kori bustard (Ardeotis kori) is arguably the largest flying bird native to Africa. It is a member of the bustard family, which all belong to the order Otidiformes and are restricted in distribution to the Old World. In fact, the male kori bustard may be the heaviest living animal capable of flight.

This species, like most bustards, is a ground-dwelling bird and an opportunistic omnivore. Male kori bustards, which can be more than twice as heavy as the female, attempt to breed with as many females as possible and then take no part in the raising of the young. The nest is a shallow hollow in the earth, often disguised by nearby obstructive objects such as trees.

Kori bustards spend most of their time on the ground, with up to 70% of their time being on foot, although they do occasionally forage in low bushes and trees. This bustard is a watchful and wary bird. Their behavior varies however, and they are usually very shy, running or crouching at the first sign of danger; at other times they can be completely fearless of humans. They have a hesitant, slow manner of walking, and when they detect an intruder they try to escape detection by moving off quietly with the head held at an unusual angle of between 45° and 60°. Being a large and heavy bird, it avoids flying if possible. When alarmed it will first run and, if pushed further, will take to the air on the run with much effort, its wings making heavy wingbeats. Once airborne it flies more easily with slow, measured wingbeats, with the neck extended and the legs folded. It usually remains low and lands again within sight.

This bird has a loud, booming mating call which is often uttered just before dawn and can be heard from far away. Mostly residential, kori bustards may engage in nomadic movements. These migratory movements are probably influenced by rainfall and there is no evidence suggesting any regular pattern. These local migrations take place at night but have not been mapped. Trial satellite tagging of one male kori bustard by the National Museums of Kenya demonstrated a migration along the Rift Valley between Tanzania and southeastern South Sudan.

The courtship displays of the males are impressive and elaborate, successfully advertising their presence to potential mates. The males hold their heads backwards, with cheeks bulging, the crest is held erect, the bill open and they inflate their gular pouches, forming a white throat "balloon". During this display the oesophagus inflates to as much as four times its normal size and resembles a balloon. They also puff out their frontal neck feathers which are splayed upwards showing their white underside. The white may be visible up to 1 km away during display. Their wings are drooped and their tails are raised upwards and forwards onto their backs like a turkey, the rectrices being held vertically and their undertail coverts fluffed out. They enhance their performance with an exaggerated bouncing gait. When displaying they stride about with their necks puffed out, their tail fanned and their wings planed and pointed downward. They also emit a low-pitched booming noise when the neck is at maximum inflation and snap their bills open and shut. Several males dispersed over a wide area gather to display but usually one is dominant and the others do not display in his presence and move away. The displaying males are visited by the females who presumably select the male with the most impressive display. Occasionally fights between males can be serious during the mating season when display areas are being contested, with the two competitors smashing into each other's bodies and stabbing each other with their bills. They may stand chest-to-chest, tails erect, bills locked and 'push' one another for up to 30 minutes.